Skip to content
You are here
Home > Glos Athletics

Here at Severn Sport we are delighted to announce a new partnership to add to our ever growing contact list, we welcome Gloucester Wrestling on board in what has been a fantastic start to 2015.
After intense negotiations between our man Ryan and Gloucester Wrestling’s Luke & Iestyn…ok it was a lovely drink in a pub…we have agreed to form this partnership so expect more wrestling to appear on Severn Sport.

Excitingly we are able to officially launch another ticket competition on our Twitter. This time the lucrative prize of 1 group ticket (4 people) to the Gloucester Wrestling show in Churchdown on Friday 3rd of April. Like similar competitions we have ran all you need to do is follow us on Twitter and retweet the tweet below in order to be entered into the draw.

COMPETITION TIME! We have teamed up with @GlosWrestling to give away a group ticket for their show next week. RT THIS & FOLLOW US TO ENTER

The competition closes on Tuesday 31st March at 12pm and the winner will be announced on all of our social media outlets that afternoon. 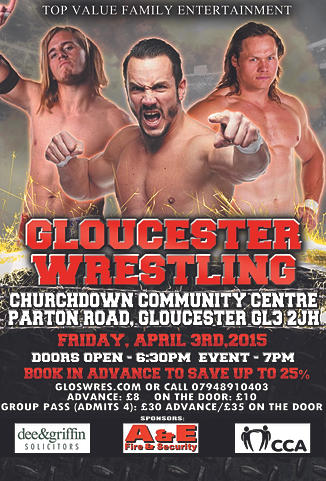 We encourage all of you to go along and check out some of the best wrestling Gloucester has to offer in what will be a landmark show for both Gloucester Wrestling and ourselves. Doors open at half 6 with the event kicking off at 7 with a 5 match card for the nights entertainment, including Gloucester’s local lad Iestyn Rees taking on the physically dominant Buzzsaw Bronson as well as Justin “The Hammer” Sysum squaring off against former TNA star Mark Haskins and a hotly anticipated tag team bout between The Bruisers and their youthful counterparts, The Lionhearts. Also expected to feature in the event are Antonia De Luca, Tiger Ali, Max Alexander and Robert Caine.

Our man Ryan will be covering the event for us with a preview and review to come next week. But at £30 for 4 people you have a great opportunity to see it for yourself.
Good luck!

“I don’t tend to panic like that. But it’s helped me” – #GetButlerActive Update